Drones and phones: technology zooms in to help Saving our Species

Technology plays a vital role in monitoring and assisting threatened species. From drones to phones, these non-invasive gadgets are helping ecologists and citizen scientists to expand their reach.

Saving our Species (SoS) is a major player in the Garden Escapes strategy for the Key Threatening Process of hawkweed invasion. The Hawkweed Eradication program covers orange hawkweed (Hieracium aurantiacum) and mouse-ear hawkweed (Hieracium pilosella). It is the largest weed eradication program in New South Wales, seeking to prevent significant parts of South East Australia – and vital native animal and plant species’ habitats – from being infested with this highly invasive weed. A key challenge is finding out the limits of the infestation, which is in a remote and rugged part of Kosciuszko National Park.

Office of Environment and Heritage (OEH) officers and volunteers (and even some four-legged friends, detection dogs) continue to work successfully on the eradication of orange hawkweed. A key challenge has been the large area over which orange hawkweed can occur and the limited resources available to survey high priority areas. Over the past two years, they have really zoomed in on these large areas with the help of company Helisurveys’ unmanned aerial vehicles (or drones).  Drones offer a relatively cheap method to survey large areas with high detection certainty.

The drone captures high-resolution colour images, and an algorithm automates the detection process by identifying pixels in the images that correspond to the colour of orange hawkweed flowers. From simple beginnings, where areas of a handful of hectares were surveyed in 2015-16, Mark Hamilton, Project Officer (Weeds) National Parks and Wildlife Service, reports that the team’s results at the end of the drone survey season in January 2018 included large areas. Preliminary results include:

‘These results offer great promise for next season when we will seek to ramp up drone survey during peak flowering season and fill in some gaps in our surveillance area in order to more rapidly delimit and eradicate the weed,’ Mark said.

Watch a YouTube video of the Digital Owl on test run for Saving our Species. 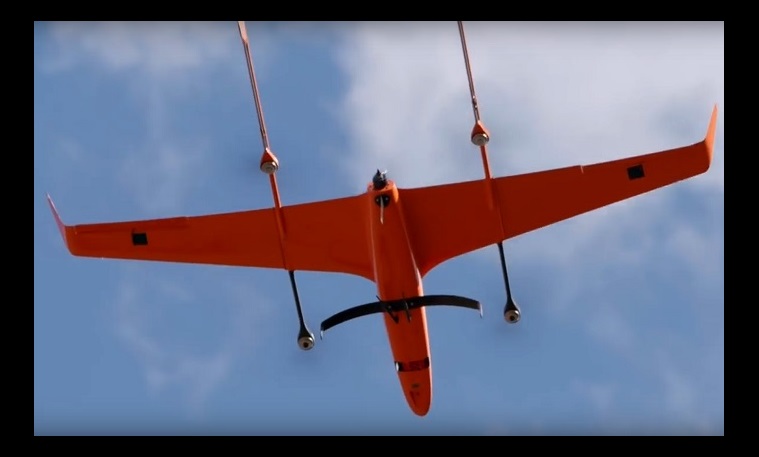 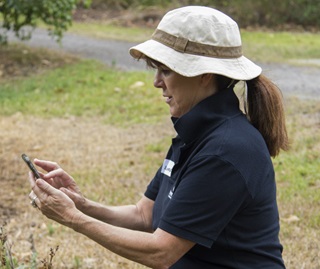 Learning more about our threatened species can be as easy as reaching for your phone. Customised apps allow academics or citizen scientists – in fact anyone in the community with a smart phone – to find, study and record precious plants and animals and their habitats.

The Hunter Region’s SoS team introduced the iNaturalist app to participants in the annual Wetlands Day activities in February this year.

Liz Crane from OEH’s Hunter Central Coast Region said the iNaturalist app enables anyone to record species in any situation – from a keen citizen scientist to a private landholder.

'It’s hard to protect something if you don’t know it’s there,’ Liz said. ‘The app can help users to discover a previously unknown population of a threatened species under the SoS program and share the information with stakeholders’.

iNaturalist data can also feed back into the Living Atlas of Australia’s central database.

Another highly accessible app is Hollows as Homes. This project works with the community and land managers to assess tree hollow availability, as hollows are an important but limited resource for wildlife in Australia, particularly in urban and agricultural areas. When a tree hollow is spotted, citizen scientists may record the location of the tree, tree species, size of hollow and if any wildlife is living in it. 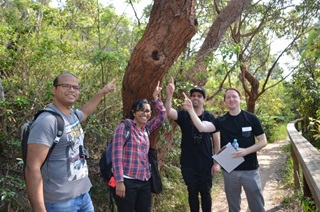 This online web based portal was designed by John Martin from OEH’s cluster partner Royal Botanic Gardens. SoS’s Scientist Geetha Ortac and her team of citizen scientists from Park Hyatt Sydney spent a morning at Bradleys Head in Sydney Harbour National Park in April learning and looking for hollows, contributing to this wonderful initiative.

The small group, from front desk to chef, was inspired by the morning’s survey:

Hotaviya from the Park Hyatt said the volunteering activity for the hollows as homes was very enlightening.

‘I had never known the importance of hollows in the trees, especially to know the process of formation of hollows which can take decades and the large biodiversity in Australia that uses hollows as homes. The walk with the guides trained my eyes to spot a hollow and to know the importance of data collection to understand if it can be used as a shelter. Now whenever I walk along the trees I look for hollows and show others too. If given an opportunity I would love to do it again!’

The information they gathered will feed back to the Hollows as Homes database.

Winter reminder: Do not collect firewood from national parks

Wanderlust pizza vendor convicted for breaches of the Food A...