A new population of Silver sword lilies has been found in New England National Park, giving new hope for the future of this extremely rare plant species. 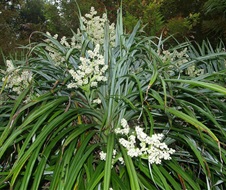 Environment Minister Matt Kean said the silver sword lily is a very rare and highly distinctive plant, so finding this new population in a new location is very exciting.

“The discovery of a new population of 200 plants increases the known population of this plant species in NSW by 30 per cent,” Mr Kean said.

“The Saving our Species team has gone above and beyond, quite literally, using drones and abseiling surveys to locate threatened plants. The new method of surveying was not only successful in finding new plants, but will also help us monitor them.

“I want to leave our environment in a better position than we found it, so it’s important we take every opportunity we can.

“Under the NSW Government’s $100 million Saving our Species program, a conservation project is in place to better understand, manage and monitor the threats facing this species.”

Silver swordlLilies prefer to grow in water seepages on cliffs near waterfalls, which is dangerous terrain to access on foot, so drones are increasingly being used to carry out surveys.

More on the NSW Government’s Saving Our Species Program.