Drying Gwydir wetlands reveal benefit of water for the environment

As the waterholes and lagoons providing important summer refuge for birdlife in the Gwydir Wetlands dry for winter, survey results reveal the benefits of earlier environmental flows. 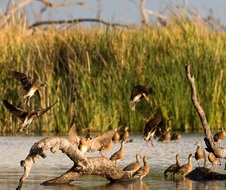 "Monitoring confirmed that after water for the environment began flowing into the wetlands last spring, valuable habitat for many waterbirds including at least six threatened species was provided," National Parks and Wildlife Service Project Officer, Dr Joanne Ocock said.

The environmental flow reached the Lower Gwydir and Gingham watercourses, filling many of the main waterholes and spreading to some of the adjacent shallow wetlands.

"The annual spring and autumn waterbird surveys were the seventh year of long-term monitoring tracking the outcomes of water delivered to the environment," Dr Ocock said.

"During our surveys 54 waterbird species were identified, including the nationally endangered Australasian bittern, and the NSW-listed brolga, freckled duck and black-necked stork," she said.

"It was particularly exciting to see more than 30 freckled ducks at one of the lagoons in spring, and in early autumn there was a large group of more than 400 brolga near one of the remaining lagoons.

"It was also fantastic to see 5 migratory shorebird species, such as the black-tailed godwit and Latham's snipe feeding on the exposed mudflats as the water receded.

"Groups of several hundred plumed whistling ducks, grey teal and nankeen night herons were also observed across the wetlands during the surveys.

"Two threatened woodland bird species were recorded in spring - painted honeyeaters and glossy black cockatoos – both listed as vulnerable in NSW," she said.

"Monitoring was completed by the NSW Office of Environment and Heritage (OEH), and the Commonwealth-funded Gwydir Long-term Intervention Monitoring Program, along with several volunteers.

"Furthermore OEH surveys for frogs found at least 4 species were breeding in the Gwydir Wetlands during spring, including the spotted marsh frog, barking marsh frog, salmon-striped frog and the eastern sign-bearing froglet.

"Juvenile frogs were found at many of the survey sites, suggesting that these species had been successful at recruiting into the next generation.

"It is a challenging time for wetland life in the Gwydir Wetlands as drenching rains are still yet to come. However, it is great to see the wetlands are providing some refuge for a variety of wetland wildlife including threatened species in these dry times," Dr Ocock said.