A project calling citizen scientists to scroll through thousands of images of a malleefowl mound has captured a rarely seen echidna love train crashing in a mound for the night. 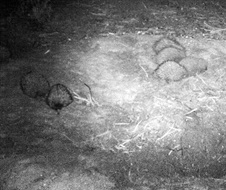 Citizen Scientist with the NSW Department of Planning, Industry and the Environment Rebekah Dowsett said the seven-echidna train was one of many amazing scenes being played out in a day in the life of a malleefowl.

"It's really exciting that the project is uncovering an array of wildlife just doing their thing in outback NSW.

"Images of an echidna love train, when many male echidnas trail along with a female to mate, is a great find as echidna mating rituals aren't often seen.

"The pictures have been captured by cameras which have been hidden in four remote locations, to give us a better idea of malleefowl behaviour and to tell us what animals and disturbances are impacting this bird's survival.

"Recently we put a call-out for citizen scientists to help us analyse the camera images. Since then, over 96,000 images have been analysed – a significant effort as each image needs to be tagged 5 times, meaning that more than 370 volunteers across the world have analysed more than 480,000 images.

"The echidna train is just one of many intriguing stories so far.

"Over one period, the images revealed that a mound in Yathong Nature Reserve had a carnival of Aussie coin currency dropping by including an emu, an echidna and a kangaroo.

"Another sequence of shots shows a goanna invading the mound, a very angry malleefowl letting it know who's boss by raking sand on its head as if to say 'You really need to go- (anna)'.

"Whilst it is exciting to see glimpses of these native animals, they can also disturb malleefowl nests and eggs, so strategies to help protect the nests from these types of animals is important for us to learn," Ms Dowsett said.

The images from the four remote cameras are uploaded to DigiVol, a crowdsourcing website developed by the Australian Museum in collaboration with the Atlas of Living Australia.

Since the Saving our Species program first called for citizen scientists to help save the malleefowl, volunteers have logged on from right across Australia, the USA and even Canada. But there are more images to be analysed and more information to be learnt.

"The cameras can collect thousands of images every few weeks so the success of this project really relies on the enthusiasm and time of keen citizen scientists," Marc Irvin, Senior Threatened Species Officer from the Saving our Species program said.

"All of the information gained through the image analysis will improve the monitoring of malleefowl across a remote and vast NSW landscape.

"We would love many more citizen scientists to join us in saving the malleefowl, and this can be done from the comfort of your home through a smartphone, tablet or desktop computer.

"Who knows what you will uncover from catching a glimpse into the secret life of native species," said Mr Irvin.

The Saving our Species program is the NSW Government's commitment to securing the future of the State's threatened plants and animals. To find out more, or to get involved with Saving our Species visit environment.nsw.gov.au/helpsos

Echidna in the mound pics: Echidna sleepover on Vimeo