Ulladulla-based National Parks and Wildlife Service (NPWS) staff have come to the rescue of a feathertail glider family that had found themselves in a hot spot of bother. 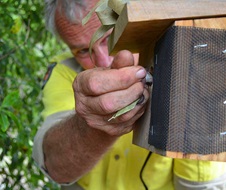 NPWS Project Officer Mike Jarman said the plight of the glider family sparked staff into action when they were found nesting in the back of an electricity box at Depot Beach campground this week.

"Electricity and dry leaves simply do not mix, so this little family of 5 had to be relocated away from danger," Mr Jarman said.

"A local electrician temporarily switched off the power allowing us to carefully remove the gliders who were sheltering in and around the meter and fuses.

"We installed a brand-new, purpose built nest box just underneath the electricity box and filled it with leaves from their original home to transfer their scent.

"With the lid on their new home safely secured, the gliders were carefully placed one at a time into their new box.

"It's an exciting move for this family of 5 but thankfully their new accommodation won't be quite as 'electrifying'," Mr Jarman said.

The electricity box has been brushed out and the hole blocked to stop a new family of critters settling in.

Depot Beach campground and cabins in Murramarrang National Park is a great place to get up close to nature and see native animals as well as some of our more unusual species including feathertail, greater and yellow-bellied gliders.

Or, to encourage wildlife into your own backyard, consider installing a nest box to create a safe home for birds and other native species.