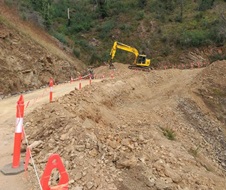 Ryan Petrov, Manager Southern Ranges Services for the NSW National Parks and Wildlife Service (NPWS), thanked the community for their patience while the most complex parts of the road repairs were completed.

'NPWS anticipates that this reopening at the start of the busy summer period will help provide a much-needed boost to the local tourism industry,' said Mr Petrov.

'Shortly after the 2019–20 summer bushfires, heavy rainfall inundated the bare landscape, leading to damage to the roadway. The rainfall blocked culverts with sediment which caused stormwater runoff to overtop the embankments, creating erosion and undermining the road surface which resulted in 4 significant slip sites,' he said.

'The extensive damage was of a scale not previously experienced through this area, and required removal of tens of thousands of tonnes of debris. Unexpected ground conditions caused delays that, in some cases, required design changes and revision of work methods and resourcing.

'Despite severe weather which caused further delays in recent months, NPWS has completed the critical structural works, reinstatement of the road base, and embankment stabilisation which required 20,000 tonnes of rock.

'Completion of ongoing superficial works and resealing of the road surface over the summer may require some brief, planned closures but these will be communicated well in advance and timed to minimise disruption.

'With these works nearing completion the road can now reopen to reinstate the important link from Tumbarumba to the east of the Great Dividing Range. The full road opening follows on from the recent partial opening that allowed access to the popular O’Hare’s campground in early October.

'Despite this good news, it is important to recognise that the impacts from the fires can still be felt along the road corridor. The steep surrounding landscape remains severely impacted from the loss of vegetation. Recent heavy rainfall events have triggered further landslips and work will be ongoing to manage these.

'The nature of the Elliott Way road corridor has significantly changed since the fires and it is important that the community is aware that further road closures may be caused by slips or rockfalls at short notice.

'NPWS will continue to monitor road conditions and undertake all efforts to minimise disruptions during the completion of the current works as well as any future works.'