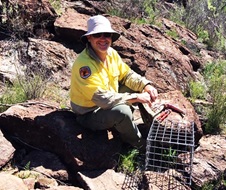 “This is an extremely rare plant species that is only found in the western part of Mount Kaputar National Park.

“This species was so badly impacted by the drought, I personally carried water up the mountain on the weekends during the worst of the dry and watered each of the plants.

“Despite our best efforts, drastic measures had to be taken, when their numbers fell to just three adult plants.

“Surveys were immediately undertaken across the site to locate any additional plants. As part of this work, approximately 300 seedlings were located within the site. This has given us some hope that the population will increase,” Mr Faris said.

Scientists based at the Australian Botanic Garden Mount Annan have now harvested a small amount of genetic material for propagation from two of the adult plants plus removing 20 seedlings from the site in the hope of securing its survival.

“25 healthy seedlings are currently growing at the Nursery at the Australian Botanic Garden Mount Annan, which will help provide an insurance policy against the extinction of these native plants in the wild,” said Dr Cuneo.

Mr Faris said other measures were also underway to protect the remaining plants on site.

“While not impacted by fires which hit parts of Mount Kaputar National Park recently, the plants are susceptible to trampling by visitors and from browsing by macropods and feral animals.

“Cages have now been constructed around the plants to protect them from this kind of disturbance,” Mr Faris said, “these measures are being undertaken alongside pest management in the park.

“Reducing the number of goats and other feral animals reduces the browsing pressure on all flora species.

“We will also be undertaking further follow up surveys within likely habitat to try and find any additional populations of the species.

“The more information we can gather on this species will help us to better understand, manage and monitor the threats it faces.

“There has been some good rainfall in the area since the beginning of the year and we are continuing to monitor the population. Hopefully they will flower and set seed in spring,” Mr Faris said.