Endangered frogs leap on a lifeline

Forty-three endangered Booroolong frogs recently rescued from their drought stricken home are set to give a lifeline to their species. 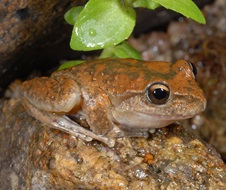 “Christmas came early for these fighting frogs, with a last minute lifeline activated in December as their water source dried up near Tamworth.

“A wildlife consultant who has been monitoring Booroolong frog populations, raised the alarm in late spring as he feared they would not survive through to the next season.

“A team of frog biologists from DPIE, Taronga Zoo, and the Australian Museum joined forces to find remaining frogs along the rapidly drying rivers.”

“As part of the Saving our Species (SoS) program the team collected the frogs from a range of sites in the Upper Peel, Isis, Cockburn and Barnard rivers. The frogs were then taken back to Taronga Zoo to be looked after in captivity.”

Mr Coote said the species is dependent on rocky permanent streams on our slopes and ranges, so taking part in this program is key to securing their future.

“The devastating drought means we can’t move the frogs to other sites, but the Saving our Species (SoS) program can help make sure they live on for future generations,” Mr Coote said.

The facility at Taronga Zoo will protect the distinctive northern populations of this species from extinction until conditions improve and they can be reintroduced to the wild.

Taronga Zoo Herpetofauna Supervisor Michael McFadden said he was relieved at the urgent response to rescue and subsequently care for the Booroolong frogs.

“We are thankful for the swift action taken to rescue these extremely valuable and vulnerable frogs from what was a very dire situation.

“We are pleased to report they are doing really well here at Taronga Zoo, and we will continue to care for them until it is safe for the species to be released back into the wild,” Mr McFadden said.