Endangered 'Goldilocks' bird released for the first time in NSW

The population of one of Australia's most critically endangered bird species has been boosted with the first ever release in NSW of 10 plains-wanderers. 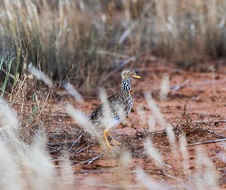 NSW Environment Minister James Griffin said it was a monumental step towards reversing the plight of the small, ground-dwelling species.

'It's thought there are now less than 1000 of these birds in the wild due to threats including grassland habitat loss, severe drought and fox attacks,' Mr Griffin said.

'But now, we're working in partnership with private landholders to restore their habitat and protect it so plains-wanderers can thrive.

'These birds demonstrate the importance of native grasslands and ecosystems, and by protecting them, we're helping to conserve native grassland habitat, which is critical for a range of other species.

'This is a win-win for farmers and the environment, and a true conservation-led partnership to save one of our endangered species.'

The NSW program is led by the NSW Government's Saving our Species program, which is backed by a $175 million commitment over 10 years. It's supported by the Biodiversity Conservation Trust, Local Land Services and Taronga Conservation Society Australia.

The birds, which have been released onto private properties in the Western Riverina near Hay, were hatched at Taronga Western Plains Zoo, Taronga Zoo and Werribee Open Range Zoo.

So far, the program has protected 13,000-plus hectares of plains-wanderer habitat across NSW's Riverina Plains.

'This partnership with private landholders is a fantastic example of conservation at its finest. Through this program, we're helping landholders protect biodiversity and restore a healthy ecosystem,' Mr Griffin said.

Affectionately dubbed the Goldilocks bird, they've been reintroduced into managed habitat that suits their specific requirements that is not too open and not too dense.

Chief Executive of Taronga Conservation Society Australia Cameron Kerr AO, said plains-wanderers are a unique Australian bird, whose genetic history dates back millions of years, which is why breeding and releasing these birds back into the wild is so important.

'This first NSW release is a huge milestone in our conservation efforts for this species, and it is so rewarding seeing these little birds returned to their wild habitat, where we hope they will thrive.'

Further releases are expected in 2022, with 37 birds in the conservation breeding program at Taronga Western Plains Zoo and 8 birds at Taronga Zoo Sydney.