Over 30 critically endangered Bellinger River snapping turtles, bred at Taronga Zoo, have been returned to their Bellinger River habitat and appear to be well after recent floods. 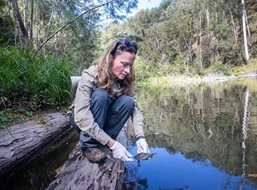 It is the only place in the world where they are found but in 2015 a devastating virus wiped out 90% of the turtles in just six weeks.

After a breeding program was rapidly developed, this release further boosts the population after earlier releases in 2018 and 2019, bringing the total number of turtles now released to 52.

Gerry McGilvray, a Department of Planning Industry and the Environment (DPIE) Threatened Species Officer, said after the Bellinger River Virus hit, a partnership led by the Saving our Species (SoS) program established a captive breeding program to ensure the species’ survival.

Gerry said: “This 3rd release of turtles since 2018 is excellent news for these animals, which are unique to the Bellinger River catchment and were declared Critically Endangered after the virus.”

Soon after the turtles were released, the Bellingen area and other parts of the north coast experienced heavy rain and flash flooding but threatened species experts and monitoring the released turtles have confirmed the turtles are safe.

Taronga Zoo Chief Executive and Director, Cameron Kerr, said that the release was a humbling moment following years of hard work and dedication by zoo staff.

“Bellinger River snapping turtles are considered one of Australia’s most critically endangered animals, and I am incredibly proud of the work of our dedicated keepers and scientists that has led to the release of these healthy individuals into the wild,” Kerr Mr Kerr said.

Radio transmitters attached to the turtles help locate them for regular monitoring by SoS Threatened Species Officers who also capture the turtles intermittently to measure growth rates, determine body condition, assess general health and look for signs of exposure to the virus.

The Bellinger River snapping turtle is a short-necked freshwater turtle in the family Chelidae  first observed by John Cann in 1971.

The release was approved by the DPIE and Environment Animal Ethics Committee and was guided by reptile and translocation experts, wildlife disease experts and zoo professionals.