Endangered brush-tailed rock-wallabies and their young have been spotted bounding through the bush in Oxley Wild Rivers and Guy Fawkes River National Parks, delighting NSW National Parks and Wildlife Service (NPWS) staff surveying the impact of the bushfires. 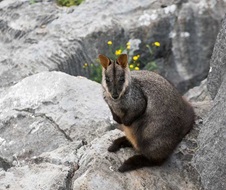 "All of the colonies surveyed had areas of burnt habitat, yet we spotted 90 surviving individuals," said Mr Thomas.

"This figure is consistent with counts taken in previous years so it is very reassuring.

"It's great to see that these endangered animals have not only survived the fires but are adapting to the changed landscape.

"Most of the colonies with surviving wallabies received emergency supplementary feeding of lucerne, sweet potato and carrots and they are most definitely bouncing back," said Mr Thomas.

Further ground-based surveys done after the fires also identified individual wallabies that were known to researchers from before the fire, including one that has been spotted over the last 11 years.

The surveys, conducted in June 2020, also revealed some young at foot that would have been in the pouch when the fire hit, and some new pouch young that may have been born since the event.

For the first time the aerial survey extended into nearby Guy Fawkes River National Park in the upper reaches of the Aberfoyle River.

"In more good news for the species we discovered an additional 25 brush-tailed rock-wallaby colonies in this park and saw surviving individuals in 12 of the previously-known sites," Mr Thomas said.

The 2019–20 fires burnt more than 80% of known Brush-tailed Rock-wallaby habitat in NSW.

Post-fire assessments carried out by NPWS and the NSW Government's Saving our Species program showed that local wallabies had been left stranded with limited food and water and the supplementary feeding was vital to help maintain these colonies and allow them to recover.