Ahead of Wattle Day (1 September) Australia's endangered Gordon's Wattle is bursting back to life after fears the species was nearly wiped out in last Summer's bushfires. 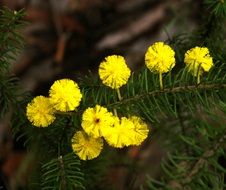 Trent Forge from the NSW Government's Saving our Species (SoS) program said Gordon's Wattle (Acacia gordonii) occurs on sites at either side of the Grose Valley in some of the most intensely burnt areas of the Blue Mountains and Wollemi National Parks.

"The fires burned through our main conservation site near Bilpin so when we went back in, we didn't know how many of the adult plants had survived the impact," said Mr Forge.

"We found that we had lost half of the shrubs at these sites, around 50% of the known population in Wollemi and Blue Mountains National Parks.

"While the adult plants were gone, we knew that this particular native shrub needs intense heat and fire to crack open its very hard seed pods," said Mr Forge.

The team returned to survey the site in August 2020 cautiously hopeful that nature had done what it does best and that there were signs of recovery.

"We walked up to the rock ledge where these plants were hanging on to see hundreds of bright green Gordon's Wattle seedings emerging from the ashes of a very black landscape.

"We have since seen a 400% increase in the number of Gordons Wattle plants at this site post-fires," Mr Forge said.

"The fire had successfully stimulated the seed bank creating a perfect ash bed for the little seeds to spring into life," said Mr Monahan.

"The subsequent rains over the fire ground combined to create ideal germination conditions.

"Also as part of this conservation project we have gone over old records for this species dating from the 1800's.

"In reviewing this data, we were then able to revisit these historical sites after the fires and re-discovered the plant emerging.

"These seedlings will be given the chance to mature to replenish the seedbank," said Mr Monahan.

Despite its iconic status in Australia, around 31 wattle (or acacia) species are threatened in NSW. Visit the NSW Government's Saving our Species program to learn more about Gordon's Wattle and what is being done to help it.