Australia's Environment Ministers have agreed to NSW's request to establish a working group to examine innovative controls to protect native species from the devastating impacts of feral cats. 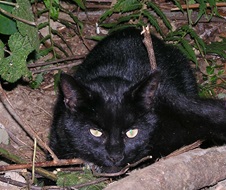 Environment Minister Matt Kean welcomed the opportunity for New South Wales to chair the group which will look at long-term possible control methods.

"NSW is already researching the most up-to-date control methods to hit feral cats head on, including a $30 million partnership with the University of New England to refine existing feral cat control techniques, test new control options and develop integrated strategies.

"This complements similar work being undertaken by other jurisdictions as part of national efforts to control feral cats and protect Australia's threatened species."

"Current feral cat controls help, but they aren't going to solve the problem, so we need to explore new ideas such as synthetic biology and genetic controls," Mr Kean said.

"By taking a long-term view, and investing in game changing new technologies, we stand the best chance of getting on top of the feral cat problem in Australia."

The working group will consider the research already underway by organisations such as CSIRO in relation to genetic control, as well as barriers to development and implementation.

"On ground application of such technologies could be more than twenty years away, but we need to start this work now to try and halt the terrible impact of feral cats on our wildlife," Mr Kean said.

The working group will review potential new strategies and report back to the Meeting of Environment Ministers.

Meet the women working to save our species

Feeding brush-tailed rock-wallabies after the fires