Young local artists will be painting Wollongong all shades of green this weekend to promote the 2017 Green Flicks environmental film competition. 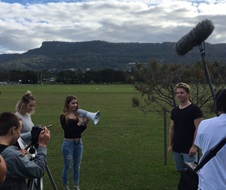 From Friday 4 to Sunday 6 August, local street artist Kane 'Trait' Horspool will be painting a 'change' themed mural to encourage 12 to 24-year-olds to get involved in the local film competition.

Simon Tedder from the Office of Environment and Heritage said the Green Flicks wall in McCabe Park in Wollongong is a way to celebrate the creativity of young people across the region.

"We want this green wall to be a conversation starter," Mr Tedder said.

"The community are invited to come down, watch the wall being painted and talk to a talented local artist.

"Trait has been asked to depict his interpretation of 'change and the environment' so we're excited to see how this mural unfolds over the three days.

"We're hoping that the creativity on display this weekend will get people talking, sharing ideas and motivated to submit an entry into 2017 Green Flicks," Mr Tedder said.

To help young people develop their story ideas, a series of free film making workshops will be held by OEH throughout August: