Environment Minister Matt Kean today announced the awarding of nearly $1.2 million in research grants for one of the State's most damaging ecological issues, eucalypt dieback. 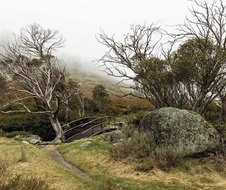 "If you've noticed pale-grey tree skeletons in the landscape – such as those along Kosciuszko Road on the Monaro Plain between Cooma and Jindabyne – that's dieback," Mr Kean said.

"These sick and skeletal trees are increasingly emerging across our State's landscape, and we don't know exactly why."

Dieback has killed millions of trees over a relatively short timeframe, damaging ecosystems and decreasing biodiversity. It's occurred across New South Wales, from near Bourke to the New England Tablelands, North Coast, Sydney's hinterland and down to the Snowy Mountains.

"By engaging some of the country's best scientific minds we are hoping to find ways to remedy the current dieback areas and prevent future outbreaks," Mr Kean said.

The 6 grantees in collaborations, led by universities and the CSIRO, have each been awarded up to $200,000 in funding.

Drought, insects, soil microbes and climate change are all thought to contribute to dieback, but without further research, it's difficult to address.

Dieback occurs when eucalypt trees lose leaves and die. It can happen to trees on their own, in groups, or in natural bushland. First noticed in small patches in the 1940s, dieback has increased significantly since around 2006.

A total of $1,197,911 million in grants was awarded to research collaborations at the Australian National University, the CSIRO, University of New England, Macquarie University and Western Sydney University.