Hello from the Southern Tablelands. I’m Erika Roper, a Threatened Species Officer with the Saving Our Species program in the Department of Planning, Industry and Environment. I’m in charge of several of our threatened plants and animals, and this involves travelling to sites all over south-eastern NSW to check on their wellbeing and threats.

In early January I headed up to Kosciuszko National Park, on Monaro Ngarigo, Wiradjuri, Wolgalu and Ngunnawal Country, to carry out some population monitoring surveys and threat assessments on a couple of species. Want to come along for the ride? Buckle in.

First up on the list was to head to Gulf Plain to check on the pale golden moth (Diuris ochroma), which is endangered in NSW. You would be forgiven for assuming that I am talking about an insect, but the pale golden moth is actually an orchid! Like many Australian orchids, they spend most of the year below ground as a tuber, invisible to the eye and safe from herbivores. In spring and summer, the pale golden moth sends up 3 to 5 leaves, then a flower spike that will have 1 to 3 pale yellow flowers. Once the flowers have been pollinated, they will develop into seed pods that contain thousands of tiny seeds.

This season has been a strange one for orchids, with many species flowering weeks or months earlier than expected. Orchid flowering seems to be influenced by weather events such as high rainfall and temperature change, and many species also respond to fire, which could explain some of the strange orchid behaviour we are seeing this year.

Out at Gulf Plain we discovered that the pale golden moths had also flowered early. We found a lot of seed pods that were ready to burst, but fortunately there were still some flowering. This provided us with a great opportunity to see the orchid at multiple life-stages and we were also able to collect some seed for the Mount Annan Botanic Gardens seed bank.

We set up a few monitoring plots so we can track changes and threats to the population over time. The main threats to the pale golden moth in Kosci are competition from weeds and damage from feral animals like pigs and horses. 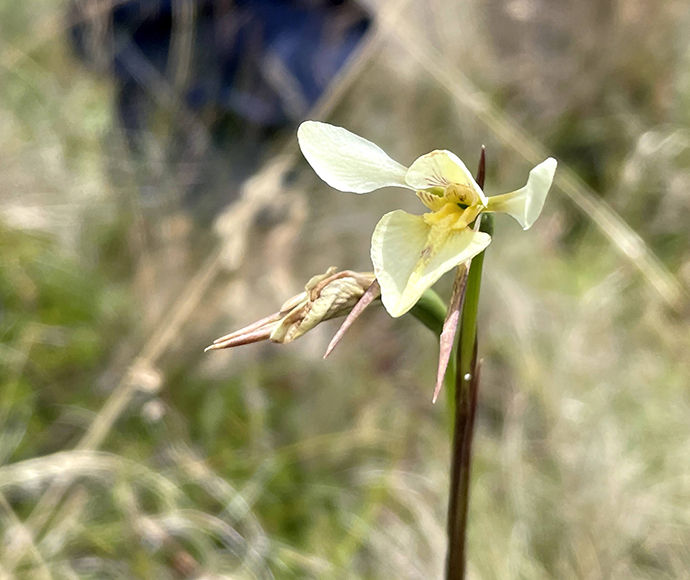 The next day we set off for Nungar Plain to look for another threatened plant, the mauve burr-daisy (Calotis glandulosa), which is vulnerable in NSW. Unlike the orchids, the mauve burr-daisy is visible all year round, though it is easier to see when it’s flowering. At Nungar Plain there are several long-term monitoring plots set up, so all we had to do was find them and count the daisies. Easier said than done it turns out! While a couple of the plots were right by the track the rest were scattered out on the plain, which meant a hike to get there and 2 shoes-off creek crossings!

Nungar Plain was one of the areas burnt during the 2019-20 bushfires, but it seems to be recovering well. Many trees are resprouting and the ground beneath the trees is carpeted with pillows of prickly starwort (Stellaria pungens). We even saw a kangaroo with her joey. The grassland on the open plain was also affected by the fires, but many of the species have responded well, including the mauve burr-daisy. We had to replace a couple of melted plot markers, but we counted good numbers of daisies in the plots, including a lot of seedlings.

While we were hiking between the daisy sites on Nungar Plain we stumbled across a large patch of triggerplants, with beautiful hot pink flowers, and more orchids.

There were two different species of orchids, both leek orchids (Prasophyllum sp), named for their leaf, which looks like a very small leek or chive. The first species we noticed was the mauve leek orchid (Prasophyllum alpestre), which has relatively large (for a leek orchid) white and purple flowers. The second species was the subalpine leek orchid (Prasophyllum sphacelatum), which can be quite variable in its colouring. We found mostly striped green flowers, but also a couple that were dark purple, and one that was pale green. While these species aren’t threatened it was amazing to see so many all in one place. 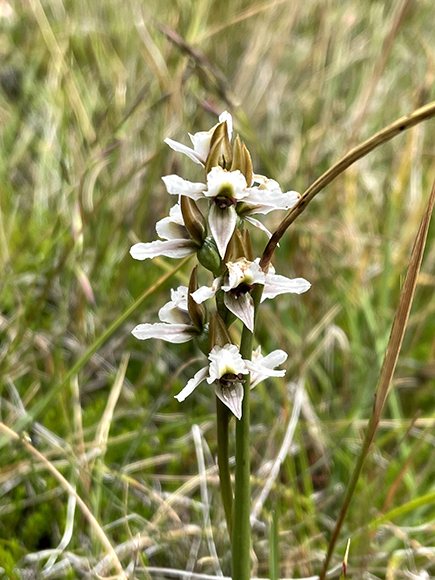 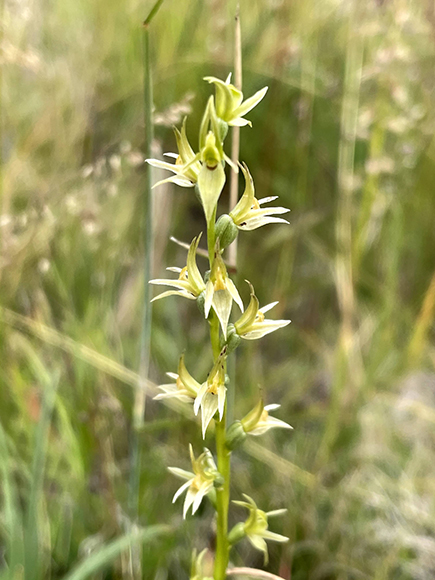 On my way out of Kosci I stopped in at the Kiandra Cemetery and found an aptly named Kiandra leek orchid (Prasophyllum candidum) that was just finishing flowering and starting to develop seed pods amongst the graves scattered on the hillside. Cemeteries can be great places to visit, not just for the history, as they can often be little havens of biodiversity.

There is so much to see out on the plains in Kosci, you just need to pay attention as you walk. While walking through the grass we would often flush stubble quail (Coturnix pectoralis); they wait until you almost step in them then explode out of the grass in front of you in a burst of frenzied wing-flapping. I was also lucky enough to flush a Latham’s snipe (Gallinago hardwickii), a first for me, while looking for orchids near a creek on Gulf Plain. There are also reptiles on the plains, small skinks and snakes that scurry away before you can get a good look at them. If you take a minute to crouch down and look at some of the flowers you might also see some pollinators. Metallic moths and flies, beetles, native bees, and my favourite, the mountain katydid (Acripeza reticulata), are all there if you pay attention.

So next time you visit Kosci have a good look around and have a think about the threatened species you might be lucky enough to see, and how you can help them survive into the future.

Free workshop to help Mid-Coast locals save on energy bills

Save money and electricity at Goulburn's new Energy Informat...

North Coast businesses encouraged to take on the power of ba...

Hunter businesses encouraged to take on the power of battery...