The distinctive birds, also known as jabiru, were sighted during recent surveys to monitor the region’s recovery from drought. 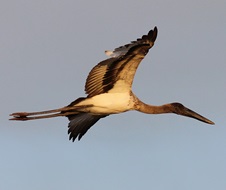 Water for the environment was added to natural inflows earlier in the year to aid refuge recovery after the drought for these and other local wildlife.

DPIE – Biodiversity, Conservation and Science leads the management of water for the environment in NSW.

The department’s David Preston said the black-necked storks were a highlight of the recent survey, along with the chance to see many other waterbirds.

‘We spotted a variety of ducks, egrets and ibis along with migratory waders including Latham’s snipe,’ Mr Preston said.

‘It’s always special to see young birds starting their lifecycle in the Gwydir wetlands, especially threatened and iconic species like the black-necked stork.

‘As well as bird surveys, we’ve recently completed a round a of frog surveys.

‘While all of the usual flow-responsive species were detected, their numbers were low and there was little evidence of breeding activity.

‘It’s been a difficult few years for local wildlife but we are ever-hopeful that natural rainfall events coupled with managed water for the environment will allow these beautiful animals to survive in the long term,’ Mr Preston said.

You're invited to the South East environment webinar series