The small and stocky gang-gang cockatoo was the most popular Saving our Species bird in the Guardian Australian Bird of the Year first round of voting, placing at number 14 and narrowly missing out on a coveted spot in the top 10. 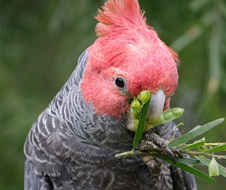 While it may not have won the hearts of readers, we’re here to sing the praises of this distinctive and threatened bird.

Description: Gang-gang cockatoos are one of the more distinctive and charismatic members of Australia's avifauna. These birds are primarily slate-grey, with the males easily identified by their scarlet head and wispy crest, while females have a grey head and crest and salmon pink-edged feathers on the underbelly.

The bird’s call has been likened to a creaking gate or cork being pulled from a bottle.

Habitat: In NSW, the gang-gang cockatoo is distributed from the south-east coast to the Hunter region, and inland to the Central Tablelands and south-west slopes.

Threats: The gang-gang cockatoo is facing several threats in NSW, resulting in its vulnerable conservation status, including loss of key breeding and foraging habitat due to intensive wildfire events and development.

The species is susceptible to Psittacine cirovirus disease, a beak and feather disease that is fatal to gang-gang cockatoos.

The gang-gang’s habitat is also negatively impacted by invasive weeds and it can be aggressively excluded from forest and woodland habitat by over abundant noisy miners.

Saving our Species is working on a targeted conservation strategy to help protect our gang-gang cockatoos.

Don’t be alarmed if you hear a growl from the gang-gang cockatoo while it eats. This is just a sign of contentment – something most of us can relate to while digging into our favourite meal!