Fight against Phytophthora in NSW gets $174,000 boost

Researchers from the Office of Environment and Heritage (OEH) and the Royal Botanic Gardens Sydney have received $174,000 to start a conservation project to fight disease affecting many endangered plants in NSW. 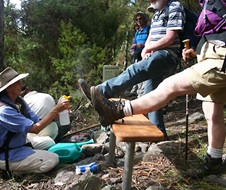 "Many threatened species in NSW are at risk of the root rot pathogen called Phytophthora cinnamomi, which poses a significant threat to the survival of many plant species and ecosystems," Dr Edward Liew, Manager, Plant Pathology, Royal Botanic Gardens said.

"This new project will inform management actions to reduce the spread of Phytophthora and will complement existing work being done under the Office of Environment and Heritage's Saving our Species program to help individual species threatened by the disease."

Phytophthora attacks the roots of plants and is spread through water and along root systems. At least 83 threatened plant species and threatened ecological communities are either known to be susceptible to this disease, or are located near habitat that may be vulnerable to the disease.

"Limiting the disease's spread and managing infected sites using hygiene and quarantine protocols is the most practical and powerful way to address this threat," said Dr Liew.

The first step for the project will be to undertake soil sampling and testing to better understand the geographic distribution of Phytophthora and the sites where it is found. This information will help produce a map, identifying the main spots where the disease is found and the plant species most at risk.

"There is currently no statewide map of Phytophthora risk areas in NSW, so this new resource will be a key tool to identify and prioritise sites for management and monitoring and where to deploy strategies to stop new occurrence of the disease in unaffected areas.

"The project will also evaluate the effectiveness of a range of hygiene methods to limit the spread of the disease, and identify the most effective techniques which will be used to develop a set of hygiene protocols for NSW.

"Most of the contemporary hygiene measures like boot scrubbing stations or vehicle wash down facilities have had very little research on their effectiveness in helping stop the spread of Phytophthora, so it is important we test and evaluate these methods", Dr Keith McDougall Snr Threatened Species Officer, OEH said.

The NSW Government has invested $100 million over 5 years in the Saving our Species program which aims to secure as many threatened species as possible in the wild for the next 100 years.