A new warning system is in place for one of the State's most dangerous yet attractive tourist hot spots - the Figure Eight Pools at Royal National Park. 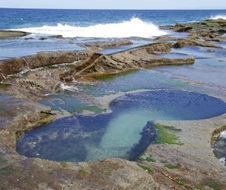 Environment Minister Gabrielle Upton said that, in addition to warning signs and daily safety alerts, there is now an online wave risk rating tool that predicts wave conditions for each daylight hour at the site, up to 4 days in advance.

"It works like a fire hazard warning: the higher the risk rating, the more dangerous the wave conditions and the more likely that visitors may be injured.

"Many victims have been injured in the rock pools by large waves crashing over the platform, which is only accessible at low tide.

"It is in your interest to check out the risk rating when planning your trip and again just before you depart. Be prepared to cancel your trip if the risk is high or extreme," Ms Upton said.

Emergency Services Minister Troy Grant said there has been a series of rescues where sightseers have been trapped by tides or gone onto the rock platform in unsafe conditions.

"Emergency Services often have to rescue people in hazardous conditions that, tragically, could have been avoided," Mr Grant said.

"Anyone intending to visit the site will be doing the community and themselves a huge favour if they check the risk rating tool first and make their plans based on its rating so they can stay safe.

"In short, if there is a high risk, plan to visit a different beautiful spot in a national park   we're very fortunate in NSW to have plenty of them," Mr Grant said.

Shaun Elwood, Area Manager, Royal National Park said that as well as the danger from large waves washing over the rock platform, the trek to the pools is also dangerous.

"People need to take care for the entire trip as a large majority of injuries occur during the challenging, steep and slippery two hour walk to the site," said Mr Elwood.

The research used to create the risk ratings was conducted by scientists at the NSW Office of Environment and Heritage and the University of Newcastle.

WilderQuest adventures in nature for kids