A rare plant found only in the Manning Valley has awed researchers, after its population increased from just 600 to more than 20,000 plants after the summer 2019-20 bushfires. 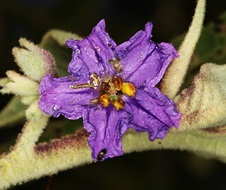 The huge increase in Manning Yellow Solanum plants, an endangered species in NSW, was found during post-fire surveys on the mid north coast undertaken by the NSW Government's Saving our Species (SoS) program, National Parks and Wildlife Service (NPWS), and the Forestry Corporation of NSW.

"The Manning Yellow Solanum is known to respond to soil disturbance, and things like treefalls, fire, and prolonged moisture levels in the soil can all act as triggers for germination," he said.

"I know it is strange to think that something like fire can have a positive impact on our natural environment but like most Solanum species, the intensity of the fire can kick-start germination that would have otherwise taken years to happen.

"In this case, the catastrophic fires and subsequent heavy rain events of 2020 have proven to be a perfect storm for germination of this threatened species and we've now seen a huge response.

"I'm pleased to say that post-fire surveys also found the first ever records of this plant within the NSW National Park estate, including Goonook and Talawahl Nature Reserves."

The plants are still in their juvenile growth stage, and threatened species experts with SoS will be monitoring them to see if they successfully flower and fruit. Research is also being undertaken to learn more about this plant and SoS is working closely with Forestry Corporation, NPWS and private stakeholders to undertake further post-fire surveys that will collect information to help inform the conservation management for the species across the Manning Valley.

Listed as endangered in NSW, the shrub most frequently grows in wet sclerophyll forest and rainforest edges. Its seed bank is believed to be able to survive for up to 40 years and may go undetected.

For more information, visit the Saving our Species fact sheet.