Fire threat eases but plenty of work still to go

After a relentless effort from National Parks and Wildlife Service (NPWS), Rural Fire Service (RFS) and Forestry Corporation of NSW crews, the fire which affected Mount Canobolas State Conservation Area and other land tenures is now under control. But the work is far from over. 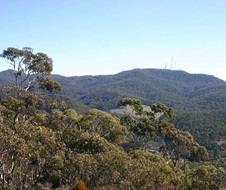 NPWS Ranger Steve Woodhall said the fire has had a big impact the Mount Canobolas State Conservation Area, with full assessments to be carried out in coming weeks.

"This is the largest fire seen since the 1980s in the Mount Canobolas State Conservation Area, with 1175 hectares burnt or approximately 70% of the park," Mr Woodhall said.

"As a result, there is risk to the public from fire damaged trees including falling branches so it is extremely important that people stay well away and take note of all barriers and warning signs.

"The park will remain closed to the public for the foreseeable future until it is considered safe for visitors.

"NPWS will be undertaking an aerial survey to map the fire intensity and to help assess the impact on the park's plant and animal communities as well as any potential impacts on Aboriginal cultural sites.

"We will also need to assess damage to visitor infrastructure including walking tracks, bridges, lookouts and signage.

"A post fire landscape is very vulnerable to disturbances and erosion can further impact the fragile environment as the vegetation starts to recover.

"Australian native animals and plants are well-adapted to fire, and although we are yet to assess the impacts it is still likely that the park will take some time to recover.

"NPWS are grateful for the support of our firefighting partners in working with us in what were at times severe conditions to get this fire under control and preventing further harm to the park.

"We are asking for people to be patient while we assess, rebuild and make the park safe and encourage people to check National Parks and Wildlife Service for updates on when visitor areas are reopened before visiting the area," Mr Woodhall said.