Another rare prehistoric tree species unique to Australia has been saved after a dedicated team of firefighters and specialists rapidly responded to the threat posed by a bushfire in northeast NSW in December last year. 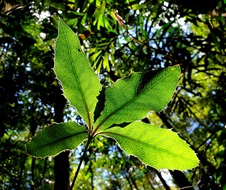 Project Officer for Threatened Species Justin Mallee from the National Parks and Wildlife Service (NPWS) said the rare Nightcap Oak and other endangered species were saved thanks to careful planning and coordination by threatened species experts, NPWS, and the NSW Rural Fire Service.

"Though not as famous as the Wollemi Pines, the Nightcap Oak, with only 120 mature specimens left, is just as old and rare, with evidence of its existence dating back over 100 million years to the age of the dinosaurs," Mr Mallee said.

"The Nightcap National Park and its surrounding area is the only place in the world where these trees are found in the wild. We needed to ensure that every effort was made to save them from the Mount Nardi bushfire.

Mr Mallee said experts from the NSW Government's Saving our Species program were able to take emergency cuttings from the trees as an 'insurance' measure.

"The cuttings, which included endangered Minyon Quandong and Peach Myrtle samples, have been removed to a specialist nursery where they are being propagated.

"We're undertaking a post fire assessment that will help us understand the impact of the fires on these species. This will inform future efforts to conserve the species, including the protection, conservation or translocation of the remaining wild population."