A Blue Plaque has been installed for the first time ever in NSW as part of the popular NSW Blue Plaques program, which recognises extraordinary people and events from our State's history. 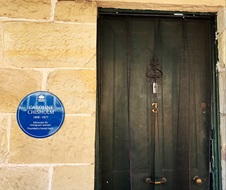 Minister for Heritage James Griffin said the Caroline Chisholm Blue Plaque in the suburb of East Maitland was the first of 21 Blue Plaques so far to be installed.

"Caroline Chisholm embodied the Australian spirit and was an advocate for women and immigrant families, so it's fitting that her Blue Plaque is the first to be unveiled," Mr Griffin said.

"Her tireless work towards improving conditions for countless immigrant women and families arriving in Australia is a history that we are proud to commemorate.

"Caroline Chisholm Cottage in East Maitland is now the permanent home for the first NSW Blue Plaque, and it's just the first of many more sites around the state that will feature the plaques.

"Our $5 million Blue Plaques program is all about getting communities involved in local heritage, and recognising the extraordinary people and stories that helped shape New South Wales."

Parliamentary Secretary for the Hunter Taylor Martin said Caroline Chisholm Cottage is believed to be the only surviving site of her charitable works, dating back to 1842.

"Caroline Chisholm was an astounding person who dedicated her life to service," Mr Martin said.

"After immigrating to Australia, she helped other newly arrived migrants, especially young women, and would meet every incoming ship to offer support in finding employment and housing for them.

"She encouraged immigrants to move inland where there were more jobs, and had employment agencies and hostels set up in rural areas right across the State, including the one now known as Caroline Chisholm Cottage on Mill Street, East Maitland."

So far, 21 Blue Plaque recipients have been named, and the NSW public will be invited to nominate more noteworthy people, stories and events when a second round of nominations opens.

With Caroline Chisholm's Blue Plaque now in place, the other 20 Plaques will be installed in yet to be announced locations in the coming weeks.

A new website that shares the stories and photos of each recipient has also been launched. To learn more, visit Blue Plaques NSW