First record of quolls at Tilbuster, north of Armidale, in 17 years

A chicken thief at Tilbuster north of Armidale has proved to be the first local sighting of threatened spotted-tailed quoll for 17 years. 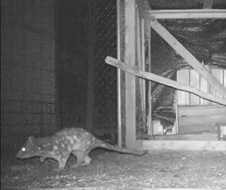 NSW National Parks and Wildlife Service Saving our Species Officer Adam Fawcett said that this was the first confirmed sighting in the area, north of Armidale since 2003.

“A local resident between Mt Duval and the Devils Pinch made the surprising find after setting up a camera to catch what he thought would be a feral cat.

"Chickens had been lost regularly in over a few weeks, so he put out an infra-red motion sensor camera to see how the animal was getting into the chicken pen and, to his surprise, captured images of a spotted-tailed quoll.

“The resident wasn’t concerned with the presence of the quoll - a simple plugging of the hole in his netting stopped the quoll raiding the chook pens, Mr Fawcett said.

Spotted-tailed Quolls are listed as a Vulnerable species in NSW. Large populations are known to occur throughout the gorge areas east of Armidale including several national parks such as Oxley Wild Rivers, New England and Guy Fawkes River National Parks and adjacent forested areas.

“Spotted-tailed quolls are the largest native marsupial predator in NSW and while there are scattered historic records in the area north of Armidale, this is the first confirmed record since 2003.

“This is an especially important find given the severe recent drought and its impact on vegetation.

“Threats to spotted-tailed quolls include loss of habitat and being hit by vehicles as they cross roads, but one of the biggest issues is animals being shot or poisoned in response to attacks on domestic chickens and aviaries.

“As demonstrated in this case, it is easy enough to make these structures quoll-proof.

“Securing the spotted-tailed quoll is part of the NSW Saving Our Species program. Surveys are planned to occur later this year across the range of this species in NSW to gain an overall picture of the health of the population in NSW.

“NPWS is always interested in new records of spotted-tailed quolls. Both the NPWS and New England Local Land Services can provide advice on how to improve poultry runs and aviaries to make them quoll-proof if you are having issues with this species at home, “ Mr Fawcett said.

Anybody with records of spotted-tailed quolls or other threatened species can contribute them to the NSW Wildlife Atlas by contacting Environment Line on 1300 361 967 or info@environment.nsw.gov.au. Alternatively, records can be entered direct to the Wildlife Atlas via the online portal.

Free workshop to help Mid-Coast locals save on energy bills

Save money and electricity at Goulburn's new Energy Informat...

North Coast businesses encouraged to take on the power of ba...

Hunter businesses encouraged to take on the power of battery...