All driving and camping at Stockton Beach in the Worimi Conservation Lands and Samurai Beach in Tomaree National Park remain closed over the Easter long weekend due to significant flooding and safety issues. 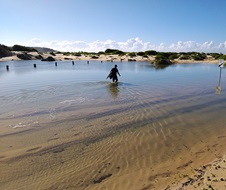 Flooding in the parks is the worst since the 2012 major floods, according to NPWS Hunter Coast Area Manager Andrew Bond.

"We don't close beach access lightly, however sustained flooding means the beaches are impassable and a safety risk for visitors, so unfortunately will have to remain closed over the Easter holiday," Mr Bond said.

Nearby Tomaree Headland and Tomaree Summit Walk also remain closed to all access due to a large landslip following the storm event.

"Protection of Worimi cultural sites is a priority for the Board, with many sites becoming exposed by the flooding and associated sand movement currently being remediated.

"Several sites remain underwater and will need to be assessed once flooding subsides, and before vehicle access can be reopened," Mr Tarrant said.

Further rainfall over recent days has prevented water from drying out and kept the underlying water table at capacity.

Weekend weather predictions for large swells and high tides will continue to make the beaches impassable to vehicles.

"These natural flooding events are vital to support the park's ecosystems, dune geomorphology and to replenish the ephemeral wetlands, contributing to the spectacular landscape," Mr Bond said.

Park roads' gates are closed and signage has been installed.

However people can still walk into the Worimi Conservation lands via Birubi Point, while pedestrian access to Samurai Beach is via One Mile Beach or Big Rocky Headland.

All visitors should check for closure alerts before leaving home. See Alerts for NSW National Parks or Worimi Conservation Lands.