The Hunter Valley has a history of flooding. The Hunter Valley Flood Mitigation Scheme was built after the disastrous Hunter River flood of 1955. It is designed to mitigate or reduce flood damage. 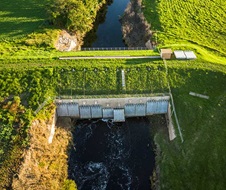 The 1955 flood is the largest Hunter River flood in recorded history, and the most devastating. It began on the morning of Tuesday 22 February when heavy rain began to fall in parts of the Liverpool Range and spread quickly to the Upper Hunter catchment area. The peak of the flood occurred on Friday 25 February 1955.

'14 lives were lost, 5 electrocuted and 9 drowned. Three drowned near Singleton and 6 in the Lower Hunter…58 homes were destroyed or washed away, 31 of them at Maitland…5200 homes flooded, including 2180 at Maitland, 1250 at Singleton and 370 at Muswellbrook.'
The Newcastle Herald, 22 February 1955.

This video gives a first-hand account from people throughout the Hunter Valley that experienced the 1955 flood.

The function of the Hunter Valley Flood Mitigation Scheme is to reduce the potential damage to life and property by controlling the velocity, direction and depth of floodwaters. The scheme has been constructed over time and currently consists of:

It is the largest integrated flood mitigation scheme in New South Wales.

This video gives a description of the construction of the scheme, from the workers themselves.

This video concentrates on the dangers present in time of flood, and the need to 'have a plan'. We see how the levees and spillways operate in times of flood.