Thegoa Lagoon has received a boost of approximately 500 megalitres of water over the past 6 weeks. 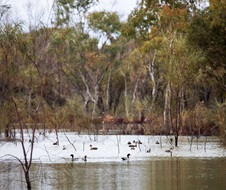 Department of Planning, Industry and Environment's Senior Environmental Water Management Officer Paul Childs said water was diverted to the lagoon from the Murray River as a result of recent rainfall in the upper catchments and high river flows.

"The purpose of the watering event was to wet areas of the lagoon that have naturally dried out over the summer months and deliver a welcome boost to the river red gums that fringe the lagoon.

The department made use of the unregulated flow which was declared by the Murray Darling Basin Authority on 16 July due to extensive rainfall in the Murray and Murrumbidgee catchments and subsequent high river inflows.

"The timing of the flow was fantastic as it meant younger invasive carp were less likely to move into the lagoon, as they don't actively move or spawn during the colder months, and adult carp were kept out by carp screens," said Mr Childs.

"This means that smaller native fish like the Murray–Darling rainbowfish and un-specked hardyhead could safely move into the lagoon and make use of the revitalised wetland, free from competition with this pest species.

The watering event was managed by The NSW Department of Planning, Industry and Environment, with the support of the Murray and Lower Darling Environmental Water Advisory Group and Wentworth Shire Council.

The department will be monitoring the water quality and response from vegetation, birds and frogs after the flows.

Gwydir Wetlands to open to birdwatchers

Gwydir Wetlands open to the public