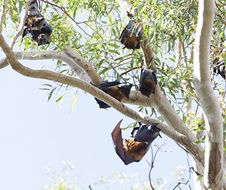 Mr Stokes said that the Flying Fox Netting Program – previously only available to growers in the Sydney Basin and Central Coast – has been extended to all NSW growers who are experiencing damage from flying foxes.

“There is now over $4 million in funding available for both throw netting as well as fully secured netting,” Mr Stokes said.

“The Office of Environment and Heritage has been working closely with the Department of Primary Industries to find a practical solution to help farmers reduce crop losses.

“The installation of flying-fox exclusion netting for orchardists, eliminates the need to issue shooting licences for flying-foxes (particularly Grey-headed Flying-foxes), where netting has been installed.”

Ms Hodgkinson said the extension of the program is great news for the state’s premier inland fruit growing regions, particularly at Young, Orange, Batlow, Bathurst and Tumut and on the North Coast.

“This is a great example of how the NSW Liberals & Nationals Government is supporting our fruit growers to find an effective solution to prevent further losses.

“In addition to extending the program to beyond Sydney, the scheme also now covers throw over netting which is a more practical solution for growers.

“This is a funds-limited program, so I strongly encourage interested fruit growers to get in touch with the RAA as soon as possible.”

“While this program started in the Sydney Basin and Central Coast regions, there has been strong demand for it to be expanded to other parts of NSW and today’s announcement is good news for orchardists across the state,” Mr Gee said.

The Netting Subsidy Program is administered by the NSW Rural Assistance Authority and more information can be found at http://www.raa.nsw.gov.au/assistance/flying-fox-netting or by phoning 1800 678 593.

130 bird species spotted as watering event ends in the Macqu...

Bittern near Balranald: secretive bird finds a safe spot to ...