An investigation into the cause of beach worm deaths on Yagon (Submarine) Beach near Seal Rocks last month has concluded this was the result of a natural event. 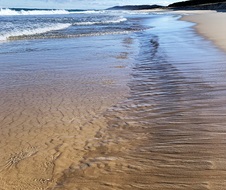 Following reports of dead and dying beach worms in June, laboratory testing of beach worms, pipis, sea water and sand from this location has found no evidence of pesticide, disease or algal toxins.

Subsequent investigations by the Department of Planning Industry and Environment and the University of NSW has concluded the beach worms were affected by a combination of beach erosion and significant fresh groundwater outflows into the beach intertidal zone.

Following the storm, the lowered beach surface was subsequently closer to the fresh groundwater table, exposing the saltwater-dependent beach worms to large amounts of freshwater flowing across the sand surface.

Adult beach worms do not move around the beach in any significant way and under normal conditions the fresh groundwater flows are well below the depth of sand they inhabit.

Beach worms are unable to regulate their internal fluids and so, when in contact with freshwater, the water moves through their skin into their bodies and disrupts internal processes eventually killing the worms.

A team of University of NSW engineers examined Yagon Beach, finding large amounts of freshwater flowing across the beach face at low tide. Excessive rainfall had occurred in the area over the previous 6 months.

During the field work no beach worms were found where freshwater was discharging across the beach at low tide however, healthy worms were found in adjacent areas with normal ocean salinity.