From the Green Room

Two threatened plant species are showing greater resilience and numbers in the state’s north west as Office of Environment and Heritage officers are working to conserve them under the NSW Government’s Saving our Species program. 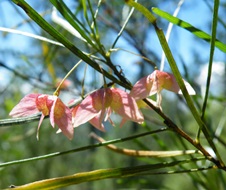 Rare plants hop and star in show of resilience

The Dodonaea stenophylla, commonly known as hopbush, is an erect shrub which grows to four metres in height in its woodlands habitat. It lights up with attractive pink flowers during winter and spring.

Senior Saving our Species (SoS) Project Officer Office of Environment and Heritage (OEH) Adam Fawcett said that the team is planning to undertake surveys to determine the extent of the population and obtain an estimate of the number of plants across both the Gwydir River National Park and Bingara State Conservation Area.

‘The surveys will help us gain an understanding of the management needed for this species and what actions are needed to secure the population into the future,’ said Mr Fawcett. 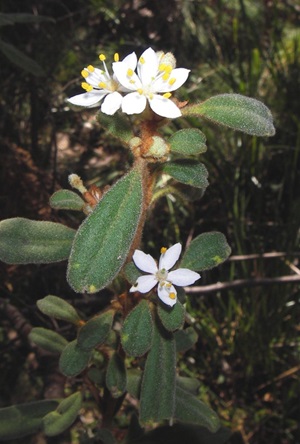 Also in the region and endemic to northern New South Wales, the Dungowan starbush (Asterolasia beckersii) is an erect shrub reaching up to three metres in height. Like the hopbush, this species boasts an attractive display of flowers, which are white, star-like and conspicuous.

The Dungowan starbush has shown fine adaptability in surprising conditions as OEH recently discovered with a much larger population in Tuggolo State Forest.

‘In fact, 122 plants were counted on the Tuggolo State Forest site, accounting for almost half of the known population of 280,’ said Senior Threatened Species Officer Darren Shelly.

‘A decade ago, plants were mainly found in Back Creek, Back River Nature Reserve or Dungowan Dam, and this time, there were few plants found on these sites.

‘This unexpected result means that many of the plants observed were thriving in areas that previously appeared to be heavily disturbed by road maintenance, associated soil disturbance and burning of log dumps.’

Saving our Species will continue to monitor both plant species to get a better understanding of their distribution and adaptability. Actions include further research, assessing potential threats and, in the case of the starbush, conducting a cool-burn to reinvigorate plant growth on a former site at Back River Nature Reserve.

Locals dig in to save critically endangered North Rothbury plant

The population of a critically endangered Hunter region plant has grown by 400 after two successful planting out campaigns by OEH and local volunteers.

As part of an SoS strategy, the North Rothbury persoonia (Persoonia pauciflora) population has now increased by almost 60%. A key component of this success is the community really taking up the planting challenge. 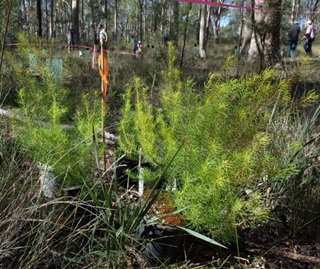 More than 40 volunteers took to their shovels in a community planting day in May.

This followed staff from OEH recently planting 200 of the species.

‘There are only 1000 known North Rothbury persoonia in the wild, so getting 400 out there is a significant contribution to preserving the species,’ OEH Senior Project Officer Paul Hillier said.

The rare plant is an attractive bright green shrub with small yellow flowers and edible fruit. As the species recovers, it will become a valuable food source for native bees, grazing animals and fruit eating birds.

The volunteers were assisted by staff from National Parks and Wildlife Service, Australian Botanic Garden Mount Annan and OEH, and representatives from Mindaribba Local Aboriginal Land Council, who also gave a talk on the cultural significance of the site.