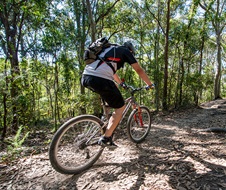 As part of the NSW Government's Economic Recovery Strategy an additional $91.5 million will be invested into shovel-ready projects in our national parks in a significant boost to our nature-based tourism industry.

Treasurer and Environment Minister Matt Kean said this investment will support jobs by creating better facilities – such as walking trails and family-friendly amenities – across the State's vast network of national parks.

"From Western Sydney to the Far West of New South Wales, families are flocking to national parks and we want to make sure facilities are up to scratch and able to meet this increased need," Mr Kean said.

"Before COVID we had more than 60 million visits every year, national parks were already a key driver of the visitor economy, generating $18 billion in economic activity and supporting over 74,000 jobs.

"Since COVID visitation levels have skyrocketed, highlighting the role parks play in supporting the physical and mental health of the community. Put simply – national parks are good for the soul."

This funding is part of the largest ever investment in national park visitor infrastructure, enhancing our natural environment and supporting regional economies with over $14 million will be invested in critical conservation projects.

Open day as Youdales Hut rises from the ashes