The Office of Environment and Heritage (OEH) will take advantage of the Curly-bark Wattle’s brief flowering season from August to September to find and monitor this rare plant. 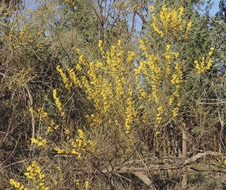 The NSW Saving our Species (SoS) program had provided $3,200 in funding to undertake fieldwork monitoring of the wattle on Monia Gap Station, west of Lake Cargelligo.

“Only about 30 populations of this wattle are known and most of these are very small, located near Cobar south to Hillston area,” said OEH Senior Threatened Species Officer, Darren Shelly.

Populations of the Curly-bark Wattle occur in conservation areas in Gundabooka National Park near Bourke, and Yathong and Round Hill Nature Reserves. About 20 of the populations have fewer than 500 individual plants left.

The Monia Gap population is the largest on private land and represents the southern-most extent of the species in NSW.

“This is a great example of how SoS is investing in conservation actions to recover threatened species, like the Curly-bark Wattle, which is found mainly on rocky sandstone ridges in central NSW,” said Mr Shelly.

“Carefully targeted funding like this has an impact on projects to save endangered species.”

The funding enables OEH to engage a contractor to monitor Curly-bark Wattle plants inside and outside grazing animals’ exclosures to determine the influence of feral goats on the plants.

Feral goats are one of the main threats, grazing, browsing and horning on the adult plants and seedlings, and causing habitat erosion. Feral goats are found in all known Curly-bark Wattle locations.

The project to save the Curly-bark Wattle will also include surveys to identify population numbers of the wattle and fencing to protect them from feral goats and grazing animals.

Curly-bark wattle (Acacia curranii) is a broombush-like shrub growing to 4 m tall, with long, wispy branchlets and a very characteristic, reddish-brown, curling fibrous bark. Plants are silky-downy all over and the flower-heads are spherical to slightly cylindrical, golden-yellow in colour, on stalks 1 - 2 mm long.