Learn more about recent Saving our Species (SoS) events, including teaching kids about threatened species using an edible poo competition and a kombi full of shorebirds. 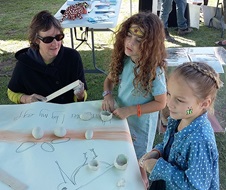 Kurrajong (in the lower Blue Mountains) was alive on Saturday 15 September with the first ever Kurrajong Koala Fest, brought together through a partnership between the Office of Environment and Heritage, Hawkesbury City Council, Greater Sydney Local Land Services, Hawkesbury Environment Network, and many more.

Our SoS team ran the world's first ever Edible Koala Scat Lookalike Compootition as part of a koala education project across seven schools in the area, delivered by Brewongle Environmental Education Centre.

We were a bit nervous about how the ‘compootition’ would go, but it was a blistering success with many entries, and it attracted plenty of attention from passers-by.  The criteria for judging was: 1. authentic koala-scat appearance; and 2. deliciousness. The local mayor helped judge the edible poos and didn't even baulk at tasting some very realistic specimens! 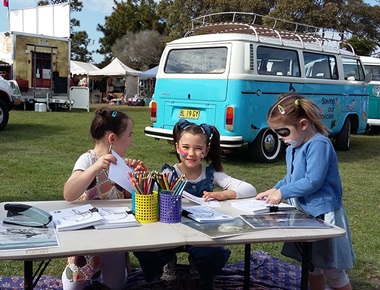 The October long weekend is always a popular time to hit the beach, perhaps with your 4WD, fishing rod or four-legged friend.

This 2018 long weekend saw SoS team members, accompanied by the local NPWS ranger,  staff from MidCoast Council and a Melbourne-based artist, load up a kombi full of shorebird postcards to hit the Kombi Festival at Old Bar on the NSW mid-north coast.

It's all part of a multi-agency program to raise awareness of the importance of beach nesting sites for endangered shorebirds and encourage beach visitors to ‘share the shore’ with our feathered friends.

Species including little terns, pied oystercatchers and beach stone-curlews lay their eggs on the sand, relying on camouflage to keep their eggs and chicks safe. Unfortunately, this means they are often not seen by people walking their dogs or in vehicles – until it’s too late.

In 2018, SoS and NPWS Discovery Rangers offered a free Shorebirds Discovery Program to schools in the Taree–Manning area. Six schools took part over 18 sessions involving 849 students. Such positive feedback was received from schools and students that the program will be offered again in 2019.

Around 30,000 people visit the Old Bar Kombi Festival so this was a golden opportunity to reach out to beach users and offer some simple tips to ‘share the shore’:

Thank you to the many readers who took part in the survey. We appreciate your positive feedback and suggestions.