Give seal a wide berth at Forresters Beach

NSW National Parks and Wildlife Service is asking beach-goers to keep back from a large Australian fur seal which will likely be sunbaking at Forresters Beach on the Central Coast this weekend. 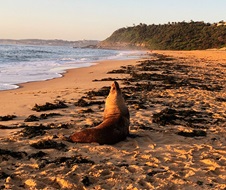 If feeling threatened, a seal can move very quickly on land and will cause a serious injury if it bites.

People must keep back at least 40 metres from the seal, not walk between the seal and the water and keep their dogs on-leash, even though it is usually an off-leash beach.

The same bull seal was attacked by a dog at Long Reef north of Sydney earlier this month, which resulted in the dog owner being fined $1300, NPWS Marine Wildlife Team Leader Susan Crocetti said.

Jools Farrell from ORRCA (Organisation for the Rescue and Research of Cetaceans in Australia) said they have been following the seal – nicknamed 'Reg' because of his tendency to regulate his temperature by warming up when he hauls onto the sand.

He is identifiable by the big notch which has been taken out of his front flipper. He also has a small injury on his chin that has been assessed and ORRCA will continue to monitor his health.

"Reg has been trying out a few beaches over the past 5 weeks – travelling from Long Reef, to Collaroy and now Forresters," Ms Farrell said.

"We are calling on the community to give these animals space. We also want people to know not to walk in between the seal and the water – that's their escape route, and they may feel threatened."

"Seals were hunted to the brink of extinction in the early 1800s, they are still threatened but it's good they're coming back. They're no longer occasional visitors, but residents of the greater Sydney region and their numbers are slowly increasing," Ms Crocetti said.

"We need to learn to co-exist with them – they are amazing creatures – but keep your distance for their health and your safety. If you want to take a closer look, take a photo."

Hauling out is a natural habit of these sea dwelling mammals and the vast majority of seals lying on rock shelves or beaches are just resting or digesting a belly full of fish. However, we call on people to report a sick, injured or distressed seals to NPWS on 13000 PARKS (1300 072 757) or ORRCA on 02 9415 3333.

All marine mammals are protected in New South Wales.