Following a string of seal sightings along the coast over the past week the NSW National Parks and Wildlife Service (NPWS) is calling on the public to give them plenty of space after small crowds gathered at a number of locations to get a closer look. 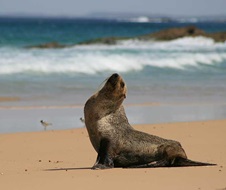 NPWS Ranger, Andrew Marshall, said today that when the seals haul out at beaches and rocky headlands people often mistakenly think they are in distress.

"Seal numbers are steadily growing and while they have become a fairly common sight on the south coast over the past twenty years and less so north of Sydney over the same time, we are now seeing more and more hauling out along the northern NSW coastline," he said.

"North of Sydney they are still a bit of a novelty for the public and of course that means they draw crowds of onlookers.

"People often think they are in trouble when they haul out along the coast but the reality is that the vast majority of these animals are simply having a rest and people should keep at least 40 metres away from adults and 80m if they are a pup.

"Only very occasionally do they require veterinary assistance," he said.

So far this week a half a dozen seals have been reported from as far south as Jervis Bay up to the mid north coast and include Sub Antarctic and New Zealand Fur seals and even one Long-nosed Fur Seal.

A large male New Zealand Fur Seal and a much smaller Sub Antarctic Fur Seal is still drawing the crowds at Lighthouse Beach at Port Macquarie.

"They might look fairly docile lying on a beach but they can move faster than you can when roused and they have a good set of sharp teeth.

"They are wild animals and so they can be dangerous if you get too close.

"The law states that you must remain at least 40 metres distance from a resting fur seal.

"Mostly they just want to rest at a location for a few days and they need this so please leave them alone. If you see a seal in distress or injured report them to the NPWS or ORRCA (Organisation for the Rescue and Research of Cetaceans in Australia) but give them space please," Mr Marshall said.