Australia’s leading native animal rewilding project has hit another milestone, with the tenth extinct species, the golden bandicoot, being reintroduced into a NSW national park. 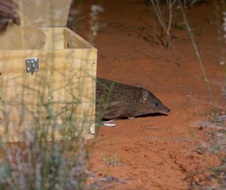 The NSW Government is establishing a network of eight feral predator-free areas across the state, making it a world leader in rewilding.

Minister for Environment James Griffin said the latest release of about 40 golden bandicoots into Sturt National Park means 10 mammal species previously unseen in NSW national parks for about a century are now back where they belong.

'These golden bandicoots are the tenth extinct species that we have rewilded in a NSW national park, which is a major milestone in our work to turn back the tide of extinctions in this state,' Mr Griffin said.

'Due to threats such as feral cats and foxes, golden bandicoots are extinct across 95 per cent of their former range, with the only wild mainland population found in a small patch of northwest Western Australia.

'It’s incredible that just three years after the NSW Government reintroduced the first mammal in this project, we already have 10 species that were previously extinct in NSW returned to national parks.'

The golden bandicoot is the fourth locally extinct mammal that the NSW National Parks and Wildlife Service, working in partnership with Wild Deserts (a partnership between University of New South Wales and Ecological Horizons), have reintroduced at Sturt National Park.

Eventually it’s hoped the site will be home to 900 golden bandicoots.

'The return of this species into these deserts is so important ecologically because the golden bandicoots dig and turn over the soil where leaves and nutrients collect and support the food web.

'We are also excited to be playing a part in connecting and restoring this desert on behalf of the original Aboriginal people, linking two groups across the continent.'

The Sturt project is part of the NSW Government's $40 million feral predator-free area partnerships project, which is returning at least 13 mammal species currently extinct in New South Wales back into the wild.