Most of NSW experienced good air quality, by international standards, during 2015 according to NSW Office of Environment and Heritage analysis. 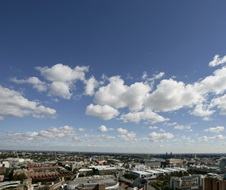 Environment Minister Mark Speakman today released the 2015 NSW Annual Air Quality Statement, which reviewed air quality across the state over the past 12 months.

Mr Speakman said NSW air quality had improved since the 1990s and major air pollutants such as nitrogen dioxide, sulphur dioxide and carbon monoxide were now well within Australian standards.

“The NSW government led the national particle standards review at last year’s Meeting of Environment Ministers and was instrumental in the adoption of strict new national standards for fine particles (PM2.5) and coarse particles (PM10). These endorsed standards are amongst the toughest in the world.

“We also are expanding and upgrading our network of monitoring stations and developing a series of air quality improvement strategies.”

“We are committed to providing air quality information to the community and maintaining the most comprehensive air quality monitoring network in Australia because we know air pollution has a significant impact on the community’s health and on the economy,” Mr Speakman said.

Last year the government added new fine particle monitors at Campbelltown, at Rozelle and in the Illawarra. New monitors are to be installed this year in regional NSW and Western Sydney.