90 green and golden bell frogs, an endangered species in New South Wales, have been found alive and well by Saving our Species officers. 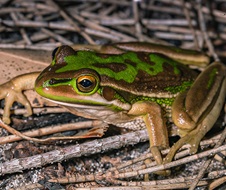 We found the frogs in wetlands south of Nowra and around Bawley Point, following the summer's bushfires in the Shoalhaven region, which burnt a large area of known frog habitat.

Green and golden bell frog breeding was also recorded, with tadpoles found at wetlands around Bawley Point following the large rainfall events in February, giving us hope that frog populations will continue to persist in this region.

For the first time, green and golden bell frogs were also located in a constructed wetland built especially for the frog in Worrigee Nature Reserve by the NSW National Parks and Wildlife Service in 2018.

This shows that through action and sustained conservation commitment, we can and are making a difference for a species that has had more than its share of challenges to survive.

Under Saving our Species, green and golden bell frog populations are being managed in the NSW North Coast, Hunter and Greater Sydney and Southern Tableland areas, as well as in the South Coast.

Monitoring and surveys across all these populations will take place later this year when green and golden bell frogs are most active.

As their name suggests, green and golden bell frogs are a vivid pea-green, splotched with metallic golden markings.

Frogs are the unsung heroes of our ecosystems, controlling insect populations, helping to maintain water quality and acting as important indicators of environmental health. Saving our Species is committed to securing a future for our frogs.

How citizen scientists are helping save the superb parrot