Winners of the NSW Government’s 20th annual Green Globe Awards were announced on 28 November at a gala event at Taronga Zoo Centre. 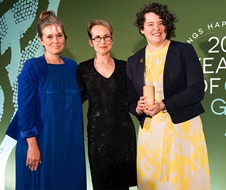 The Natural Environment Award was presented to Fujitsu for their Digital Owl project. Fujitsu developed the Digital Owl AI-enabled drone to monitor Mt Dangar plant life in partnership with Saving our Species. The remote area is home to endangered species of Acacia and native daisy found nowhere else in the world. The Digital Owl precisely pinpointed the plant populations, faster, cheaper and more cleanly than conventional helicopter surveys, freeing up money and manpower to use elsewhere in the project.

“This technology could change the way we find and monitor threatened species, saving us both time and money.” said Tania Pettitt, Partnership Manager of the Saving our Species program.

"Tweed Shire Council is thrilled to be recognised with a Green Globe Award, having worked hard over the last 10 years to build a credible reputation as sustainability leaders by delivering tangible environmental outcomes.” said Tracey Stinson, Director Sustainable Communities and Environment at Tweed Shire Council.

The Sydney Opera House, joint winner of the Public Sector Leadership Award, was recognised for a raft of initiatives including the installation of an artificial reef in partnership with UTS to increase marine biodiversity.

Be inspired by the amazing work of this year’s Green Globe Awards winners and finalists.

NPWS continues the war on Bitou in the Great Lakes

New funding for cane toad research in NSW to help save threa...

All over for Yellow Mimosa

Pest control rules to be strictest in Australia