River users and the wider community in the Gwydir River catchment are advised that there is currently a planned environmental water delivery occurring from Copeton Dam into the Gwydir and Mehi Rivers and into Carole Creek. 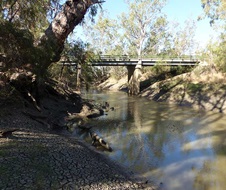 The release commenced from Copeton Dam on the 25 August 2017 and will be completed in early September 2017.

The Early Season Stimulus Flow environmental watering event is designed to kick-start the aquatic food web in the lower Gwydir River catchment. The 'stimulus' flow will pre-empt native fish breeding in spring and is being undertaken to provide habitat and connectivity and to support a steady supply of food for native fish and their offspring.

The event will see around 11,000 megalitres of water released out of the ECA and Commonwealth Environmental Water holding accounts in Copeton Dam. The flows being delivered out of the main Gwydir River into the Mehi River (total event around 7000 ML), the Gwydir River below Boolooroo of 2000 ML with around 1250-1500 into Lower Gwydir and around 500-750 ML into Gingham; and around 1000 ML into the Carole Creek.

All deliveries are well below minor flood levels and are also at below peak irrigation delivery rates.

The deliveries are also expected to provide a small end of system connection via the Mehi and Carole but will only provide very small flows into the wetlands downstream of the Gingham at Tillaloo and the Lower Gwydir at Millewa.

The Early Season Stimulus Flow event has been triggered by recent inflows into Copeton Dam and forms part of the Environmental Water Advisory Group's (Gwydir ECAOAC) annual planning. The flows in the Gwydir, Mehi and Carole consist of a short pulse followed by a gradual recession and at the finish will be back down at current very low natural flows.

The timing of late winter and early spring is aimed to minimise disturbance to native fish species during any spawning that may occur from mid-September onwards once water temperatures in the river systems start to naturally increase.

This delivery has been planned by OEH in consultation with the Gwydir ECAOAC and with the delivery being developed with advice from DPI Fisheries, CEWO and WaterNSW.

This event will help support native fish population in the Gwydir and Mehi rivers and Carole Creek, system that have been identified as being important for native fish outcomes.

OEH along with delivery partners, will closely monitor the releases and fish outcomes are being monitored by DPI Fisheries under the Commonwealth Long Term Intervention Monitoring program. Any remaining flows will be adjusted for weather conditions and natural river flows. For additional information, visit Gwydir valley