Hand pollination: Doing the insects' job for them

Hand pollination is becoming an increasingly popular approach to investigating threatened plants that are having difficulty pollinating. 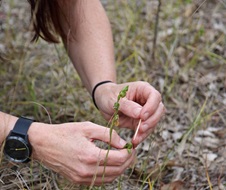 Not many people can say they’ve spent a day doing an insects’ work, but that’s exactly what Illawarra-based Senior Threatened Species Officer, Jedda Lemmon recently did as part of hand pollination efforts to help ensure the survival of the Illawarra greenhood orchid.

‘One of the main reasons we use hand pollination is because some species depend on specific pollinator species, such as a gnat. If these aren’t present or active at the time of flowering, then reproduction of the plant may suffer. So really, we are doing the insects’ job for them,’ Jedda said.

In most cases it is done to increase low levels of natural seed set. However, it may also help control the quality of seed or minimise hybridisation between species. In this case, Jedda and team were seeking to elevate the naturally low levels of seed production for the purpose of securing good seed collections for the Australian PlantBank.

‘At this point we don’t know if the low pollination rate is due to the gnat being naturally low in numbers, whether it’s declining, or whether the environmental conditions for the gnat are not aligning well with the time the orchids are flowering,’ Jedda said.

Orchids are particularly reliant on their (often unique/singular) pollinator species, which is one of the reasons why they make up around 17% of the threatened plant species in New South Wales. There are currently just 4 populations of the Illawarra greenhood orchid, so preserving the remaining genetic diversity is critical to improving the long-term viability.

Seed banking (long term seed storage) is one of the key methods for achieving this, so in 2018, 3 populations were banked in collaboration with staff from the Australian PlantBank. This involved hand pollinating the flowering plants using toothpicks to increase the seed produced for collection and storage. The pollinated plants were then bagged with a fine mesh to minimise seed loss. The pollinated plants were then revisited 4 weeks later to collect the capsules. Soil samples were also collected to preserve the fungal associates from the soil that are critical for germinating the seed.

Jedda is optimistic: ‘Having the seed in storage gives us some security that if something unexpected happens to the wild populations, we have seed to recover from. So far, our success rate is very impressive, with over 95% of the plants pollinated rewarding us with capsules.

‘And as each capsule contains over 1000 seeds, the 28 capsules collected for PlantBank means we have at least 30,000 seeds banked already,’ she said.