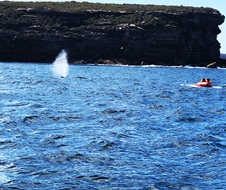 "We are delighted we could safely free this whale which appears to be swimming freely and able to continue its journey south," Mr Neilly said.

"The weather and sea conditions were on our side with this operation which combined with plenty of light really helped us achieve this successful outcome.

"The whale was first reported in possible distress earlier this morning and NPWS were monitoring the animal before the disentanglement team undertook a closer assessment of the risks and if the operation could proceed.

"The whale was entangled at both the head and the tail, making this a more complex operation.

"Once crews attached a line to the animal, they were able to work quickly to make the strategic cuts that allowed the whale too swim free.

"This was a multiagency response and I would also like to thank our partner agencies who supported us with the rescue operation today including Marine Rescue NSW, ORRCA (Organisation for the Rescue and Research of Cetaceans in Australia) and Department of Primary Industries Fisheries.

"Humpback whales are now returning to Antarctic waters to spend the summer feeding on krill so we are all very happy to know this whale can now continue on its way south, Mr Neilly said.

It is estimated that around 30,000 humpback whales migrate along the NSW coast at each year.

Have your say on the NSW Koala Strategy