The NSW National Parks and Wildlife Service (NPWS) is conducting a hazard reduction burn at Kwiambal National Park near Ashford, starting 19 August and extending into the weekend. 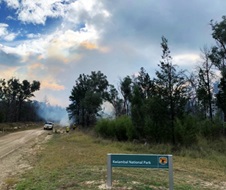 "We are taking advantage of predicted favourable weather conditions to schedule this planned burn in the north-west of Kwiambal National Park bounded by the Macintyre River, Denham Road and various management trails," said Mr Pitt.

"The hazard reduction burn is expected to cover approximately 145 ha and is located 26 km north of Ashford and 89 kilometres north of Inverell on the western slopes of the Northern Tablelands.

"This burn is among the many that we are working hard to carry out in national parks across the region during winter.

"While they are being scheduled now due to the favourable predictions for weather and wind, if you are vulnerable to smoke, we encourage you to stay indoors and keep your doors and windows closed to reduce any possible exposure.

"Ashford and surrounding areas may experience some smoke haze particularly in the late evening and early morning.

"There will be a number of NPWS fire-fighting units driving and working in the vicinity for several days during the operation and mop up.

"This burn is part of NPWS Northern Tablelands Area Hazard Reduction Program to manage fuel loads across reserves ahead of the warmer summer months, reducing the risk of spread of potential wildfires," Mr Pitt said.

For health information relating to smoke from bush fires and hazard reduction burning, visit the NSW Health website or the Asthma Foundation.

More information on hazard reduction activities: NSW Rural Fire Service and the RFS 'Fires Near Me' website and app.