Heat seeking drones are the eyes in the sky for researchers in search of cryptic koalas. 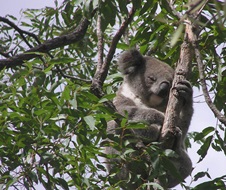 Until recently, researchers have relied on time-consuming and expensive methods such as spotlighting at night to find the animals. Thanks to some innovative work from one of our scientists, things are looking up for koalas.

The NSW Government recently announced funding of $193.3 million to help meet the goal of doubling the number of koalas in New South Wales by 2050. The program will need new and more efficient ways of surveying koalas to better understand their distribution and population size.

Drones twice as nice at a fraction of the price

Senior research scientist with the Department of Planning, Industry and Environment, Dr Adam Roff, is expanding a drone survey program that has proven more successful at finding koalas than traditional methods.

"We wanted a better way to survey for koalas," Dr Roff said. "Using drones, what we have found consistently, right across New South Wales, is that we find twice as many koalas as spotlighting teams working alongside us on the ground.

"Our small teams use a third of the people and find double the number of koalas."

From lost bushwalkers to koalas

The koala drone program followed British experience in using drones to search for lost bushwalkers. Dr Roff initiated work in 2018 to apply similar technology for finding koalas in collaboration with the University of Newcastle. Throughout the winter of 2019, Dr Roff piloted drone surveys over the forests of Port Stephens.

The drones, equipped with thermal cameras, are flown at night when ambient temperatures are coolest. The unmanned aircraft fly a pattern similar to the way someone might mow a lawn. They survey in parallel lines to search the entire forest canopy. If a detection is made, the drone stops to determine the size of the signal. A smaller infrared detection usually indicates small creatures like possums and bats.

The drones also monitor the kind of movement detected. If the infrared blob moves quickly, then it is less likely to be a koala. The location of each detection is marked by the drone with GPS so that the drone, or a ground team, can head back at daybreak to verify if it is a koala.

Going the distance at speed

Dr Roff now has a fleet of 6 drones equipped to detect koalas, and the demand for their use has been overwhelming. With plans to expand the program further, it is fortunate the price tag for each drone has fallen from $45,000 to under $10,000.

The development of Artificial Intelligence technology, or AI, allows drones to automatically determine what species is creating the infrared signature.

"It's an extremely efficient way to count koalas," Dr Roff said. "My vision is to make our technology available so that anyone can do it. We plan to make our autonomous flight programs and trained AI freely available so that the method can be applied consistently across New South Wales. All that we will need is people to launch and monitor the drones."

"When you need to find koalas, we've found that this method really is the best way."