As the weather cools, the NSW National Parks and Wildlife Service (NPWS) is rolling out its annual warning to residents across the Central West that it’s illegal to collect firewood in the region’s national parks, state conservation areas and nature reserves. 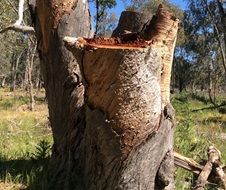 NPWS Central West Area Manager Fiona Buchanan said the warning to residents around Condobolin, Bathurst, Dubbo, Forbes and Grenfell is timely as it follows a man being fined $30,000 for illegally collecting firewood in the Murrumbidgee Valley National Park.

“We are getting the message out there that removing firewood, including deadwood and fallen trees, is not permitted in national parks,” said Ms Buchanan.

“We want people to know the rules around firewood collection, particularly during the school holidays when more people are visiting national parks.

“Its important people are aware that on-the-spot-fines apply but also very large fines can be handed out by the courts.

“The recent $30,000 fine handed out by the NSW Land and Environment Court reinforces how important it is that people follow the rules.

“Many ground dwelling animals and threatened species use tree hollows for nesting so when fallen trees and deadwood is taken illegally, it destroys their habitat. This fallen timber is part of these animals’ natural ecosystem,” Ms Buchanan said.

Firewood collection is permitted in many state forests, however those wishing to collect firewood must obtain a permit before doing so and ensure that they follow the associated permit conditions. State forest firewood permits are available online at Forestry Corporation NSW.