Support our majestic and vulnerable Glossy black-cockatoo by planting future food and homes on World Environment Day this Saturday in south-east NSW. 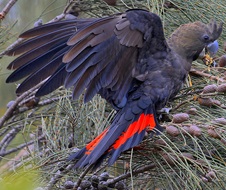 Volunteers are needed to plant trees in Bungendore, a 45-minute drive from Canberra City, as part of a Greening Australia project supported by the NSW Government.

“The property near Bungendore is one of 45 sites being planted with a share of 15,000 tubestocks to regenerate Glossy habitat in mainly agricultural landscapes across the southern tablelands and highlands of NSW,” said Richard Brittingham, project officer with the NSW Environmental Trust.

“A total of $350,00 funding from the NSW Environmental Trust and the NSW Government’s Saving our Species program is key to rolling out this exciting and collaborative community project,” he said.

“So this means Glossies are particularly threatened by habitat loss and habitat fragmentation – but we can do something to help, and that’s what this planting day is about,” Ms Wegner said.

“Glossy black-cockatoo are widely distributed across eastern New South Wales, but their numbers have declined in recent decades. Extended dry periods and widespread fire have placed added pressures on populations, especially in regard to food availability.

“Glossies tend to spend most of their day in Allocasuarina trees, so the best way to see them is by listening out for their calls or the clicking noises when they’re chewing the small cones.

“We’re entering year four of this seven-year project, and it’s been wonderful working with landholders and raising awareness of these beautiful birds and what they need to survive and thrive.”

Many sightings of Glossies have been reported in the project’s target area, which encompasses Sutton, Tarago, Marulan and Bungonia.

Planting volunteers must RSVP by Wednesday 2 June on EventBrite.