Saving our Species Project Officer Peter Higgins has been recognised with a Special Commendation award by the Royal Zoological Society of NSW for his work over many years on Australasian birds, primarily the highly-respected 7 volume Handbook of Australian, New Zealand and Antarctic Birds (or HANZAB as it is affectionately known). 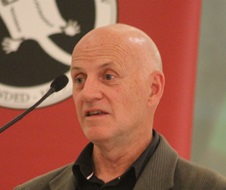 The Society reported the presentation of his 2016 award in the latest edition of their journal, Australian Zoologist.

Having worked as a consultant biologist and ecologist for over 30 years and in affiliation with OEH on many projects, Peter is currently based at Alstonville as a Saving our Species (SoS) Project Officer. 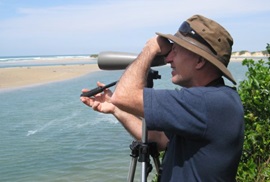 Peter devoted nearly 20 years of his working life to the compilation and publication of the HANZAB volumes.

Peter told SoS News that he found the award “a very unexpected honour”. As he pointed out, the work resulted from many years of compiling, writing and editing with a great team of people.

“I came on board in 1987 when they realised they needed to employ a few people to ensure that Volume 1 was published in time for the International Ornithological Congress to be held in Christchurch, New Zealand, in December 1990 – only the second time the Congress had been held in the southern hemisphere,” Peter said.

“We did it – just! Subsequent volumes came out at intervals of 2–3 years. The last volume was published in early 2006.

“BirdLife Australia is working on digitising the work to get it online, but that is likely to still be a number of years in the future.” 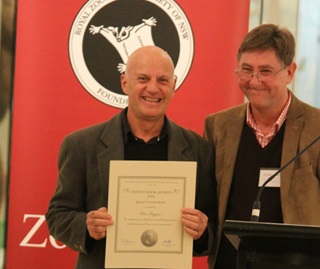 Peter added that “the Royal Zoological Society of NSW’s commitment to natural history publishing and conservation through the Whitley Awards has made a significant difference over the years to the publishers that actually put these books into print and the people who compile them in the hope of making a difference to the wildlife of the region.”

Peter has since co-authored accounts of the world’s honeyeaters, about half of which occur in Australia, and New Zealand’s Stitchbird, for the Handbook of the Birds of the World.

Meanwhile, Peter is really enjoying his SoS role which he took up earlier this year, working with another great group of colleagues and hoping to kick some goals for our threatened wildlife.

He is currently working on Byron Bay Diuris (orchid) and the Byron Bay Dwarf Graminoid Clay Heath EEC that it occurs in, and potential projects for the landscape-managed stream of threatened species.

Read the article about Peter in Australian Zoologist (PDF 1.2MB)

Caring for the Clarence: A community tree planting initiativ...

How science and technology are helping the recovery of this ...