A successful translocation program has improved the long-term conservation outlook for Asterolasia buxifolia. 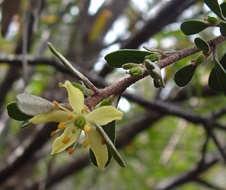 Once thought to be extinct, the endangered streamside shrub Asterolasia buxifolia was rediscovered in 2000 at Hyde Park Reserve, a bushland refuge for biodiversity on the western edge of the Blue Mountains. This species doesn’t occur anywhere else on earth, although extensive surveys have been conducted to attempt to find it in other locations.

On Threatened Species Day 2016, a band of Landcare volunteers, bush regenerators, botanists and volunteers planted 60 Asterolasia seedlings that had been grown at the Australian Botanic Gardens. Despite 3 years of drought, a narrow escape from the summer fires, and then flood, more than 50 of these transplants have survived and are beginning to flower and set seed.

The success of this translocation so far is thanks to the ongoing care and attention provided by Lithgow Oberon Landcare members, who have helped to count, water and replace guards around plants.

The program also involves monitoring, surveys to search for new populations, seed collection, seed banking and research. It is hoped that Asterolasia will soon be introduced to a completely new site to increase resilience and further reduce its risk of extinction.

The translocation program for Asterolasia buxifolia is part of a broader conservation project for this species, which also focusses on restoring stream habitats by controlling weeds and erosion.

Find out more about Asterolasia buxifolia or the Saving our Species program and how you can join the movement to help.