There’s hope for an endangered species of butterfly found only in the Central Tablelands, as scientists confirm clever caterpillars of the purple copper butterfly may have buried themselves underground to shelter from last summer’s bushfires. 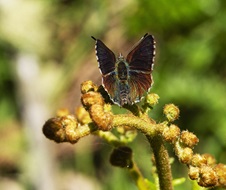 “The purple copper butterfly is found only in the central tablelands of NSW and as the fires passed through Lithgow, we were concerned about the impacts of the fire on both the butterfly and its habitat,” said Jess Peterie, Threatened Species Officer, Department of Planning, Industry and the Environment.

The NSW Government’s Saving our Species program recently surveyed 12 fire affected sites around Lithgow, and the results were more positive than first thought.

“Some sites had unburnt patches of habitat that we think gave shelter for the caterpillar life stage of the butterfly.

“We suspect the larvae dug deep into ant nests to survive the fire,” Ms Peterie said.

“Blackthorn bushes, the butterfly larvaes' main food source, were also regrowing in significant numbers, meaning the larvae has the food needed to grow and develop.

“Because the butterfly is so rare and only active for a few months each year, we won’t know the exact impact on adult butterfly numbers until spring this year when we do more surveys.”

Just before the bushfires hit, the purple copper butterfly was spotted for the first time in 10 years on a private property near Mt David, just outside of Bathurst, where it was thought to be locally extinct. The butterfly was also found at a new site not too far away from the Mt David population.

“Given the findings from last year’s survey, undertaken in partnership with the Central Tablelands Local Land Services (LLS), and the positive post-fire habitat surveys, we are hopeful for the future of this species,” Ms Peterie said.

Community awareness and involvement is one of the key priorities in the purple copper butterfly conservation effort.

The butterfly's habitat is a subspecies of Blackthorn often found in open eucalypt woodland. Land managers with this habitat can help protect this species by letting Saving our Species know if there are signs of the purple copper butterfly living on the property.

The purple copper butterfly is smaller than a lot of people imagine, with a wingspan of about 2 cm. It can be identified by its collage of colours - bronze, green, blue, deep brown and of course purple undertones.

Butterflies are not only a beautiful insect but play several roles in the environment. They act as a pollinator; as a food source for other species; and are an important indicator of a healthy ecosystem.

To contact Saving our Species with any information or queries about the purple copper butterfly, please email savingourspecies@environment.nsw.gov.au.